The World’s Drinks and How to Mix Them by William Boothby (a reproduction of the 1908 edition) with a new introduction by John Burton. Softcover 143 pages.

William T. “Cocktail Bill” Boothby (died 1930) was an American bartender and writer of San Francisco, California in the years before and after the 1906 San Francisco Earthquake. He tended bar for many years at San Francisco’s Palace Hotel.

Based on copyright registration for his 1908 edition of The World’s Drinks And How To Mix Them, he was a resident of or had an office in Mountain View, California in 1907.

According to the introduction of the post-earthquake edition, the 1906 “Great Quake” destroyed the plates for his earlier version of this book.

Boothby’s place in the growth of the cocktail is significant; his first bar manual in 1891 contained 20 cocktail recipes among the drinks; the 1934 book under his name contains 172 pages of them. 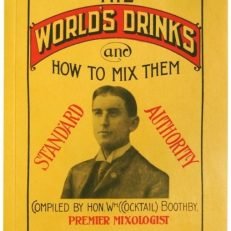 You're viewing: The World’s Drinks and How to Mix Them by William Boothby $19.95
Add to cart