By Terry Arbogast. Hardcover, 8.5 x 11 inches, 272 pages, photos throughout. A new pictorial focused on the Baldwin-Lima-Hamilton diesel era of the Monongahela Railway in southwestern Pennsylvania and northern West Virginia. Included among the 600 photos are many action and night photos. “This is the story in pictures of the MRY’s roster of 27 Baldwin-Lima-Hamilton S-12. Used in multiple unit operation with as many as six units to haul 250 car coal trains down the namesake river to Brownsville, Pa, they were quite a sight. The eight former New York Central BLH RF-16 ‘Sharknose’ diesels were acquired in 1967. 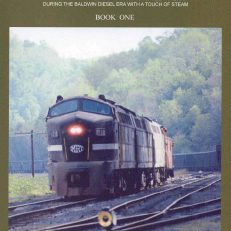 You're viewing: The Monongahela Railway The Baldwin Diesel Era with a Touch of Steam $59.99
Add to cart