2 in stock (can be backordered)

Both, the Pennsylvania and New York Central railroads enjoyed over a century of existence as industry leaders and arch competitors. They were not natural merger partners but as events unfolded they were left with little choice but to try to make a go of a less than optimum situation. Penn Central’s lifespan did not reach even a decade. In hindsight, PC might be seen as more of a transitional phase of the northeast’s rail system in the form of PRR and NYC, into the U. S. Government’s comprehensive solution for the northeast railroad crisis, “Conrail”. Despite its brief existence, PC was still worth recording, especially for those too young to have witnessed PRR and NYC. PC was the closest they might ever get to see the character of various PRR and NYC operations. And, over its brief lifetime, PC would slowly begin to develop its own identity.

This book of the author’s own images depicts a variety of PC operations in the period 1971-1976 in the northeast. Over sixty locations in New Jersey, New York, Pennsylvania and Connecticut are covered in 166 pages containing 299 photographs, of which 146 are color and 153 are black and white, and 8 maps. All locations have some text and fifteen have between one and three pages of text conveying their historic significance. 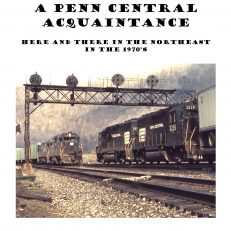 You're viewing: A Penn Central Acquaintance – Here and There in the Northeast in the 1970’s $49.99
Add to cart