Menu for wines and beverages for the New York Central’s Twentieth Century Limited, which operated between Chicago, Illinois, and New York City.  This menu is undated but probably from the late 1950’s/early 1960’s.  It is in excellent condition and a great addition to your dining car collection! 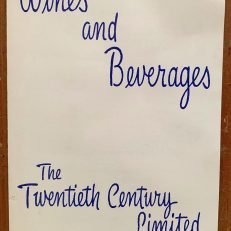