View cart “The Comprehensive Guide to Conrail Cabooses” has been added to your cart.

This book consists of articles, menus, and all of the documented recipes from the Erie; Delaware Lackawanna & Western and merged Erie Lackawanna Railroads. On October 13, 1956 the dining car departments were merged together, coinciding with the Erie moving its long distance trains from its Jersey City Pavonia Terminal to the Lackawanna’s Hoboken Terminal. The two railroads completely merged to form the Erie Lackawanna Railroad on October 17, 1960. Dining car service continued until the last long distance train, the Hoboken to Chicago Lake Cities, completed its last run on January 5, 1970. Recipes were released by the EL dining car department to its chefs as Orders. They are reproduced exactly as the original mimeographed pages appeared. In addition to the recipes you will find cooking tips and plating instructions. Some of these recipes might not meet today’s culinary tastes, but they are still interesting to read and even to try making a few!  Softcover, 50 pages.

Be the first to review “Erie Lackawanna Recipes” Cancel reply 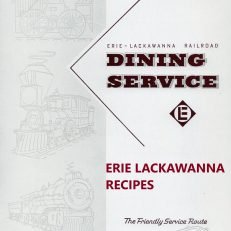