Who was Raymond W. Brown and why dedicate a book to his photography?
For sheer wealth of technical knowledge, we doubt there is anyone to hold a candle to Ray Brown. Ray grew up on the family farm within earshot of the main and the Graham line in Howells Junction. He has followed the Erie faithfully for more than fifty years. His car and locomotive drawings are well known to modelers and his knowledge of Erie locomotives and equipment can only be called encyclopedic. Equally important, Ray has collected Erie photos over these many years and was able to furnish photos from collections that are long lost. There was no question, no matter how esoteric, that he could not answer.
Ray commenced the first phase of his photography, black and white film, in the late 1930’s and concentrated on the Graham Line into the late 1940’s.  The demise of steam on the Erie seems to have sidetracked Ray’s photography interest. However, the merger of his beloved Erie with the DL&W on October 17, 1960 inspired him to pick up his camera and venture trackside along the Graham and main lines again, this time with color slide film.

Ray’s second era of photography extended from 1961 to 1974 and again was highly focused, this time on the EL in Orange County, with the greatest number of images along the Graham Line. Having lived much of his life near the Graham Line, Ray was familiar with locations most photographers from outside the region never frequented; places such as Shin Hollow, Shoddy Hollow and Bradley’s Cut.

The author, Pete Brill, was fortunate to know Ray and to have the opportunity to purchase his EL slide collection west of Middletown to Black Rock Cut which is largely focused on the Graham Line. These slides plus black and white images in the same area taken by Ray in the Erie’s late steam era are the basis of this book. 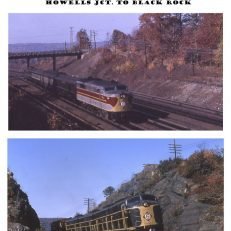