The Easton & Northern: Worth the Wait for the Connection by Peter Brill

The Easton & Northern: Worth the Wait for the Connection by Peter Brill

The Easton & Northern Branch of the Lehigh Valley Railroad was the successor to the third company, the Easton & Northern Railroad, that attempted to build from the slate region southward into Easton. This successful company was distinguished by its promotion by the LV which, although located on the opposite side of the Lehigh River, Lehigh Canal and CNJ main line, was willing to back a new enterprise in the backyard of its archrival. There was also the “small” matter of connecting the E&N to the LV, a task that took almost a decade and involved the construction of an imposing bridge while the Bangor & Portland operated the branch under lease to LV.

The anticipated slate and iron ore traffic from its new branch were quickly eclipsed by the unforeseen development of the Lehigh Cement District which generated outbound loads of cement and inbound loads of coal. The numerous grain, flour, grist and saw mills in the Bushkill Valley had been attracted by the water power generated by Bushkill Creek. Their importance was greatly diminished beginning 1910 when much larger companies began to locate on the west side of Easton. Heavy industry, typlified by Taylor-Wharton Steel and Treadwell Engineering, was joined by a host of smaller companies lured by the energetic Easton Board of Trade working hand in hand with LV’s Industrial Development Department. CNJ made its delayed entry into the region with construction of its Easton & Western Branch which shared access to some companies with the LV.

Passenger service in the LV era was minimal as there was a substantial network of trolley companies throughout the region. For years, three daily crews out of Richards Yard in South Easton worked the E&N. Freight traffic was robust as E&N crews exchanged loads with the L&NE at Stockertown and the B&P Division of the DL&W at Belfast Jct. while also directly switching Hercules Cement at Stockertown. The industrial base on the west side of Easton remained vibrant for about a half-century.

The E&N survived into the Conrail era but its customer base was evaporating and its infrastructure deteriorating. Conrail initiated cut backs while taking advantage of its control of the region’s entire rail network to modify operations on the branch and finally abandoned the remnants of the branch in 1995.

1 in stock (can be backordered)

Be the first to review “The Easton & Northern: Worth the Wait for the Connection by Peter Brill” Cancel reply 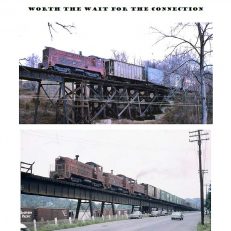 You're viewing: The Easton & Northern: Worth the Wait for the Connection by Peter Brill $28.95
Add to cart