This covered sugar bowl was produced by Shenango China as part of the 1993 CSX “Museum Collection” production run.  It is about 4 inches in diameter and stands about 3 inches tall.  It is in near mint condition, and does not have any chips, cracks or hairlines. 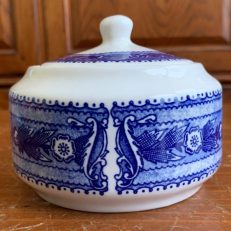