This large pedestal bowl was produced by Shenango China. It is one of the later pieces made with the 1977 date.   It is 6 1/2 inches in diameter and stands about 3 inches tall.  It is in near mint condition, and does not have any chips, cracks or hairlines. 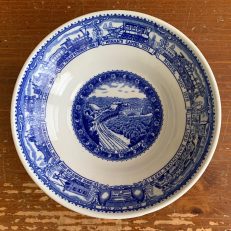